With The Academy: First Volume completed and released it’s time to begin working on Library: Book One. An official announcement will be available May 25th, so I can’t give away too much… but the book will be given a specific title. It’s nothing extraordinary, but the title will be <Title Here> (Library Series: Book One).

I have never published on the Kindle platform before so I have a lot to learn about in order to release on time. This new release of Book One will have some new content and the entire book will be edited once again. With the previous release of Book One and now the release of The Academy, I have a good idea of how to pace myself for this project.

There’s not much more to say now, but there’s a teaser picture after the jump. 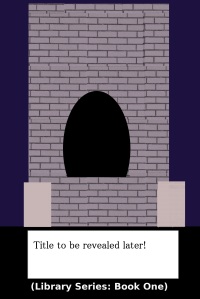 This is an image that I created in <1 hour while learning more about GIMP and trying out brushes found online. I’ve drawn a concept of what I want the final product to look like so hopefully I can gain the necessary skills to make my vision come true.

Because I cannot provide much information on the update now, I think I’ll release images of my progress with the cover art each week.